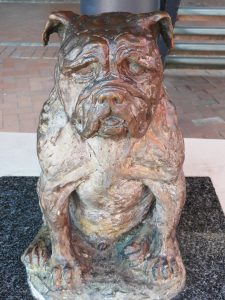 Not many towns have their very own special dog mascot – but Knysna has Bondi!

So a little of the story:

H.M.S. Verbena, a Royal Navy Sloop of the Flower Class, was built at the Blyth Dockyard in the United Kingdom, and launched on the 15th November 1915. The Flower Class ships were not only used as minesweepers, but performed duties such as patrol vessels, tugs, and personnel and cargo transporters. They were sometimes referred to as the “Cabbage Class” or “Herbaceous Borders”.

H.M.S. Verbena was assigned to the Africa Station where, from her base at Simonstown, she paid regular visits to ports on the Southern African Coast. During a 1928 visit to Lourenco Marques (now known as Maputo), the crew was presented with a pedigreed bulldog by the people of the city.

“Bondi” as he was named, became the ships mascot, and his name was entered on the ship’s list. He drew an allowance for victuals from the Admiralty.
“Bondi” visited Knysna on the Verbena’s third visit to the town in January 1931. The crew of the Verbena was due to give a variety concert in the Knysna Town Hall on the evening of 30th January, and the dog kept them company on the mission to decorate the venue. Sadly, the walk from the wharf, on a hot afternoon proved too much for Bondi, and he collapsed and died from sunstroke.

The grave was tended by crews of British ships each time they visited Knysna. The little brass plaque was polished, and the grass trimmed by the crews of HMS Delphinium in 1932, HMS Rochester in 1933, and HMS Milford and HMS Weston in 1934.

The upkeep of Bondi’s grave was continued until the outbreak of war in 1939.

During the war years, Thesens were involved in the building of Fairmiles, and the wharf where Bondi’s grave stood, became a restricted area with British ships no longer visiting the port.
In 1948, the HMS Nereide arrived in Knysna, and resumed the tradition of caring for the grave. The last visit to Knysna of the HMS Nereide was in 1953.
The Knysna harbour was closed to shipping in 1954, and so the links between Knysna and the Royal Navy which had started in 1817 by HMS Emu, ended.

On the 13th July 2001, the South African Navy revived the tradition with the visit of mine hunters SAS Umhloti and SAS Umzimkulu. With the Knysna Oyster Festival having become an annual event in Knysna, navy ships from Simonstown come through the heads almost every year. If you are here in July during the annual Oyster Festival, be sure to be at the Heads viewpoint!….it really is a sight to see. (And you get to inspect the ships too).

On one such visit, July 9th 2004, a bronze statue of Bondi was unveiled at the Knysna Waterfront by Admiral Louw of the South African Navy.

Bondi now stands in the shade of a staircase at the Knysna Waterfront, where he is on collection duty for KAWS (Knysna Animal Welfare).

The other dog memorialised in the Western Cape, is “Just Nuisance”, who never actually went to sea, but rode the trains passing through Simonstown! – Both though have naval connections. Both will always be remembered.