/
by Terry Cohen
/
in Uncategorized
/
No Comments

I have mostly been the lone traveler. The guest. The person that arrives on a B&B doorstep without a booking. Crumpled from a day of exuberant adventures, looking for a place to lay my head before the sunset draws the curtains of the day.

I like it that way. Freedom to move, walk, drink, eat and sleep. And even laugh and cry alone.

Since I opened Rest Inn Knysna, a little more than a year ago, I have only hosted one lone traveler. A writer. He booked, so to speak.  And I know he relished the quietness of the day to research and move forward on one of his many travel books. By night he relished our fabulous South African wines, and all that remained after his departure was a neatly stacked series of bottles, the content upon which he had imbibed. The very history of his evenings, spent alone with the chirping crickets, and that beautiful resident owl that hoots at regular intervals. The bottles were all that remained as evidence of human occupation.

Sometime after that stay, a family of four arrived. The evidence of their stay was a series of grape seeds scattered throughout the apartment. Although the place has a great air-flow, the dispersion of the seeds would have defied the wind, in a natural scattering of the pips. It remains unexplained.

The essence of my ramble is about how people leave things behind in their wake.

The most mysterious of all was the case of the baby-grow that vanished. It was apparently last seen airing it’s views on the washing rack outdoors. We searched the garden, and we looked under beds. But the Mama of the baby-grow insisted that it was washed and hung out to dry. I insisted that although errant baboons sometimes pass through the property, I doubted that one of the youngsters had eyed it and stolen it. Not impossible, but highly unlikely.

That was December 2018. Time passed. The baby-grow was relegated to the back of my mind, and since I scrupulously clean and dust the apartment, I considered that maybe in a last minute rush, Mama baby-grow had stuffed it in her suitcase, next to be seen in the Netherlands.

But that is not what happened. February 2019, without warning, the little outfit turned up on a table in the Rested Robin suite. There it was. An unannounced guest. The “finders” of the outfit, had already departed the accommodation before I made the discovery, and although I Whatsapp’ 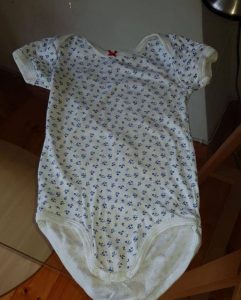 ed them to try and get some idea of where it had been found, I was still left confused.

The little outfit is currently in the post on the way back to the Netherlands. Mama baby-grow is ecstatic.

I have found panties, tops and bungy jumping certificates. I have found grape seeds and wine bottles. And a baby-grow. There is a sock still missing.

I have also been left truly beautiful gifts by guests. I have been truly blessed.

Everyday is a Holiday!